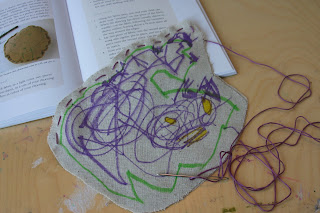 When I was a kid in elementary school back east in the early 70s, we were part of an educational experiment that was testing innovative design in the classroom setting. The physical space of the school consisted of a large square, with a so-called "pod" in every corner. Each pod was a very large, square room without interior walls, with four "classrooms," one in each corner of the pod. You could look over across the way and see what any other teacher was doing with his or her kids at any time. The open design was supposed to encourage the free-flow of information and imagination, was supposed to be a way to ensure that interactive learning occurred. Each of the four open pods was named after an area in Disneyland (although I didn't realize this at the time, having never been to Disney). The little kids had Fantasyland; the next grades were in the Frontierland pod; the third-fourth graders in Adventureland; the fourth-fifth graders in Tomorrowland.

I remember that it was very loud.

That's about the extent of innovation in my early learning experience. By seventh grade, I was attending a post-war-era middle school, with traditional classrooms whose heavy, wooden doors lined up along maze-like corridors. All very civilized, if predictable. But, then again, I'm the type of person who prefers her windows open and her doors shut.

When I became an educator myself, I was trained in and sought out all sorts of alternative classroom practices, based mainly on student-centered learning philosophies, where my role as professor was understood as "coach" or "facilitator," rather than the egghead autocrat permanently ensconced at the podium. Some of those pedagogies worked better than others, but the days when the student passively notated while the professor droned on at the front of the room were well over. Student evaluations, if nothing else, saw to that.

My daughter is now a preschooler at a Montessori school. I'm familiar enough with several of the alternative European models of early-childhood educational philosophies--Montessori, Waldorf, Reggio Emilia--that emphasize child-centered learning, but I am no expert in the practice of early childhood education. And, although I'm probably going to inflame someone's ire for saying it, I'm not sure I'm the definitive expert on All Things Daughter. I know it's popular to claim that no one else knows your kid like you do, as Her Mother, but, ya know, I don't diagnose my daughter's health conditions. A medical professional does. I don't teach her to walk across a high beam or play the piano; I pay experts who can help her do these things. So, why would I think I can teach her (despite the evidence that I am, in fact, a trained teacher)?

I guess I'm just wary of the ways we've devalued education in our culture, partly by refusing to recognize it as a very specialized area of study. Which is, of course, why women are by and large the elementary educators in this country. We don't pay much to those whom we think of as as qualified as the next guy.

Yet, my daughter has been out of school for a month now, recovering from a major surgery, and she misses her "work." So, despite my long-standing reservations on this subject, I decided we should undertake a period of homeschoo---, uh, no. Not that. Let's call it something--anything--else. Homelearning. Homeworking. Homeclass. You get the idea. In point of fact, it's only six weeks, so I am thankfully off the hook about having to justify, or even identify, what it is to anyone else. 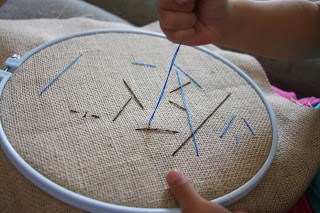 So, she and I have been working at home. We have a workbook that teaches letters and numbers and concepts such as "less" and "more" and covers some other abstract thinking. She adores her workbook, begs me to do more and more pages with her. I also converted an area of our living room into an "art center" where she can have easy access to her paints and papers and easel and fabric and thread. We've been learning embroidery with a large dull needle and a square of burlap and a large hoop. We are sewing a little bit, drawing with fabric markers on muslin and then sewing the edges round and stuffing it to make a pillow critter. We joined a "young musicians" class at the local conservatory and have incorporated music and rhythm and movement into our days working at the table in the art center. We have been taking family field trips--to the aquarium; to the low desert; to Disneyland; to Dodger Stadium; to see A Midsummer Night's Dream at the local Shakespeare in the Park event (that's tomorrow night, actually). She's been making ice cream in the new machine (which we gave Daddy for Father's Day) every night.

It feels good to be able to offer her some sort of alternative to what she's missing at school, although I can't simulate her friends for her. But I have to say I'm exhausted. And that bothersome muse keeps knocking at my door, without receiving any satisfaction.
Posted by Linda Dove at 2:10 PM