at the end, I reveal what I miss from back East...

Lost and Found in the American West

Objects write the river, its surface a tablet

through the green-brown, all those tiny mirrors

their huts blooming from cracked canyons,

and pink brooms of tamarisk tidy the buzz.

The first day, our skins turn to what might be

at the bottom of a puddle. The third day, ritual.

By then, our eyes can’t hold the river long

enough for beauty. It’s where we’ve been.

We blink by red rock, streaking varnish down

its face. Awe proves unsustainable, despite

the eddy’s backpedal, its remnant fin. Off

the river at dark, the Milky Way catches

mean fireflies, that nostalgic flick, which is not

the light of stars. 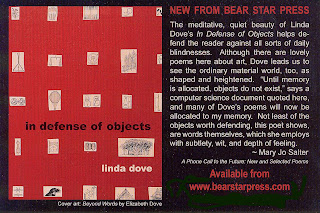