Yesterday, I received my Alumnae Quarterly magazine, and it featured one of my college classmates' new books, Spiral Jetta (Erin E. Hogan). In it, she traces her road trip in her VW Jetta to see land art installations (think: Robert Smithson and Andy Goldsworthy) of the American west. She originally went because she was "'really interested in the way that land art transforms your sense of space'." But what she discovered instead was that "'[i]t didn't have as much to do with space but [instead] with time'."

My sister is an artist who has done land art projects and made similar observations. About her work, River Print, in which she reproduced her thumbprint in rocks in the middle of a river island, she says: "I was watching time (the river) and timelessness (the unchanging mark of my thumbprint) intersecting." 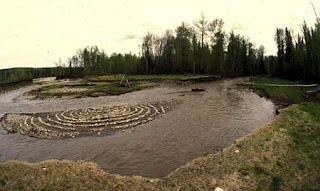 What spoke to me most in all this insight, however, was the observation that Hogan made about her own self in relation to the land art objects: "she once again realized that the work was not about objects in space but 'time and change and having a fixed place that the universe revolves around. I had always thought [the fixed place] was me; but these works were that fixed place'."

As a poet writing about objects, I am aware of the criticism that the descriptive image and the poetic list of objects is merely an opportunity for the artist to project self onto the concrete world, into the written word. So I am interested in the loss of self experienced by Hogan when faced with an object-in-time. The way that time interacts with an object, alters it, transforms it, entirely independent of the self--although dependent on the poet's eye to bring that to the page, which may mean that no loss of self is possible after all.
Posted by Linda Dove at 9:56 AM