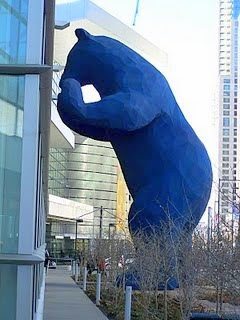 I went to the AWP conference in Denver a couple weeks back. Like the big blue bear in front of the venue (the Convention Center downtown), I was mostly peeking in. Less so than I would have been in previous years, since I (1) met up with friends for lunches / drinks; (2) had a book signing at my press's Bookfair table; and (3) went to see a friend read at an offsite reading, but, nonetheless, I'm not yet feeling like this is my tribe. Whatever one has to say, positively or negatively, about MFA programs, they do provide communities for their graduates to align themselves with (or against) later on. Having made the leap from literature professor / scholar to full-time writer, I bear the acute sense of having fought for every poet-alliance I've made. Much of the time, this struggle to find voices in sync with mine, or that will challenge mine, translates into an opportunity. At times like these, though, when the Bookfair resembles a medieval marketplace and the lobby bar scene is, well, a scene, it can leave me feeling impoverished. Especially, I might add, at my age, which is, in this context--shall we say--riper than some. Okay, most.

Highpoints included the indecent haul of poetry books and journals I picked up at said Bookfair (I actually paid a total of $48 extra dollars in airline baggage fees on this trip), some of which I had in mind to purchase before I went (and had been waiting for, so I could take advantage of the friendly price reductions) and some that I came across fortuitously, as I was, for instance, searching for an ingress to conversation at a certain press's table. No, apparently, I'm not above buying my way into an introduction.

Rick Barot's Want
Beth Bachmann's Temper
Aase Berg's With Deer
Catherine Bowman's The Plath Cabinet
Susan Briante's Pioneers in the Study of Motion (signed!)
Jeanne E. Clark's Gorrill's Orchard (gifted to me by my editor)
Oliver de la Paz's Requiem for the Orchard (signed!)
Angie Estes's Tryst
Farrah Field's Rising
Elisa Gabbert's The French Exit
Amy Gerstler's Dearest Creature (my favorite cover, maybe of all time)
Ernest Hilbert's Sixty Sonnets
Douglas Kearney's Fear,Some
Becca Klaver's LA Liminal
Melissa Kwasny's The Archival Birds (gifted to me by my editor)
Karen An-hwei Lee's In Medias Res
Karyna McGlynn's I Have to Go Back to 1994 and Kill a Girl
Jim Natal's Memory and Rain (because he now runs the CW program that I used to)
Donald Revell's The Bitter Withy
Judith Terzi's The Road to Oxnard (because I met her on the plane to Denver!)
Monica Youn's Ignatz (my second copy!)

and copies of The Laurel Review, Third Coast, and Tin House (because I'd been dying to read two poems by Joseph Fasano that weren't available on line, "Buck Season" and "Fragments"...they also gifted me their Hollywood issue, as I try to keep up with the LA poetry out there [see Becca Klaver's book above]).

Anyway. I have a lot of reading ahead of me.

I also went to several panels, including the near-epic showdown (hoedown?) between Tony Hoagland and Donald Revell. In sum: Hoagland says we need to pull back our chests and show our primal wounds, all poetry (must/should be) about suffering, and Revell answers with a quotation from Beckett's Endgame: "HAMM: We do what we can. CLOV: We shouldn't."

Actually, the idea that most stayed with me was Revell's suggestion that there should be a "conversion, a road to Damascus" between lines of a poem--otherwise, why bother with the turn?

I went to the Sparrow Anthology reading, and I'd quote something from that that I really loved, if I could find the scrap of paper I wrote it down on. Note to self: next year, bring a cute moleskin notebook, like every other youngin' around you. Come prepared to class. Duh.

Overall, I can't complain. I put faces to names. I did some stealth research (sitting alone at a table at a reading in which I didn't recognize a single soul, except Cole Swensen, who was the only other person past 40 in the room. Hey, I had merlot.). I met my editor for the first time in person. I sold a few books. And, now, I have a lot to brew on.
Posted by Linda Dove at 3:40 PM