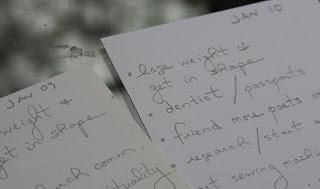 I know it's fashionable to dismiss the practice of making New Year's resolutions as cliched and token. But I consider resolutions to be like a marriage of a good "to-do" list with the Consolation of Philosophy, and I am never one to look askance at a well-wrought to-do list, nor at Boethius for that matter, so I do engage in this little ritual.

Just before Christmas, I found the little white card where I jotted down my resolutions for 2009 last January. Out of six, I checked two completely off (find a church community I can live with and publish more) and made some progress on a couple others. Clearly, publishing my first book of poetry was the professional (and perhaps personal) height of my past year, although learning to put up five-dozen jars of Drunken Fig Jam was definitely a highlight. Too bad it wasn't a resolution.

I cringe at the fact that the first thing on my 2009 list of resolutions is also the first thing on my 2010 list--the ole "lose weight & get in shape" goal--not because it isn't a worthy or, lord knows, necessary resolution, but rather because it is the superlative cliche of the entire cliched act of making resolutions, as anyone who has sat through a round of network TV commercials in the past week can attest to. At least I don't smoke.

The trick to doing an acceptable list of resolutions is the Boethian half of the model I propose--it's no fair including such whimsies as "straighten desk" or "write thank-you notes" on a list of annual goals. These are the stuff of refrigerators and pocket calendars, not New Year's Resolutions. To have resolve, after all, is to dally with earnestness. One must be philosophical about the passing of time, if nothing else.

Nonetheless, I did include "going to the dentist" and "renewing my passport" on my 2010 list. I need at least a couple resolutions I can cross off in a slightly-more-than-philosophical sense.
Posted by Linda Dove at 1:41 PM